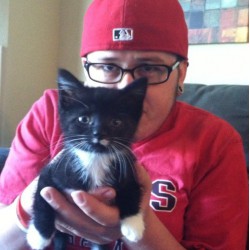 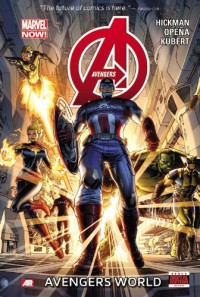 Well it's about time I stumbled across a Marvel NOW! title that didn't completely suck. In the Avengers, a clear and complex enough storyline presents itself on the first pages. Ex Nihilo, creator of change and good in the universe has captured the Avengers and plans to recreate everything in his vision. It's a plot of grand scope, and it completely incapacitates the Avengers which to do at the beginning of a story is pretty bold. It ends up resulting in a much greater resolve of conflict though at the end of the book, and seeing the whole team of Avengers together and rescuing each other is awesome. I really like in this volume that before each issue there is an Avengers crest like thing on the page, along with all of the names of those in the group, and then the ones that are in bold and not faded out are the characters that will be in the issue. It's something small but I thought it was neat to see and keep track of who you'd be looking for in the action in each issue. Other than that, it's a fairly normal comic. The artwork doesn't stand out in any way, but the story does because it's surrounded by a lot of garbage in the rest of the Marvel NOW! catalog currently. Let's hope that Avengers isn't the only title that is of a little quality.